Today, we are talking about Erin Wade, a self-taught farmer, chef and restaurateur. Erin always had a knack for succeeding. She was valedictorian of her high school and went to Harvard University with the idea that she’d become a doctor. However, after graduating from Harvard, Erin traveled to Milan to study fashion design.

One thing about Italy really resonated with her, and it wasn’t fashion; it was food. In Italy, people relished food, talking about it incessantly and enjoying it fully. After about a year, Erin grew weary of the big city and longed for more natural, open spaces. So, she moved back to the States and purchased a large property near Santa Fe, New Mexico, with no real plans of what to do with it.

Erin didn’t have a clue about farming, but gathered a ton of research from her trusty friend, Google, and hired a couple of experienced farmhands. She soon gained skills in organic farming and her crops began producing bountiful harvests. Her next step seemed obvious: create a business plan for an unusual restaurant that would feature a ton of her organically grown produce in the form of really tasty salads. Called Vinaigrette, Erin’s salad bistro—basically a well-curated salad bar with creative entrée salads, super yummy sandwiches, soups and house-made desserts—was a culinary smash, and now has three locations in two states.

Most of the produce available at Erin’s two New Mexico restaurants comes from her 10-acre farm there, and a Texas farm provides local produce to her restaurant in the Lone Star State. For Erin, running Vinaigrette is about more than feeding her customers delicious, healthy dishes. For her, sustainability is a top priority. That’s why food waste from the restaurants gets returned to her farm to feed the animals, and also gets composted back to the land to feed the healthy soil.

Thanks to Erin’s hard work and dedication to growing and serving healthy, organic (and really delicious) produce-focused dishes, we’re certain Vinaigrette is changing the way people think about eating salads. You can bet the farm on it! 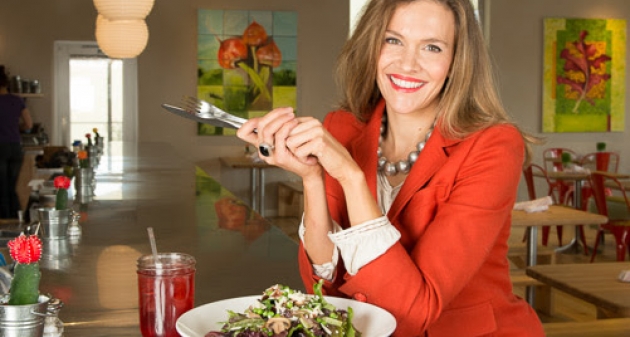 YOU DID IT: From Harvard to high fashion…